Friday June 2nd, the RABC leadership met with His Excellency Teodor Melescanu, the Romanian foreign minister. The meeting took place at the Romanian UN Mission and it was orchestrated by the UN permanent representative of Romania to the UN, Ambassador Ion Jinga and by the Hon. Ioana Gabriela Costache, the Romanian Consul General in New York. Minister Melescanu was visiting New York, attending a meeting for the selection of the new president of the UN Security Council. 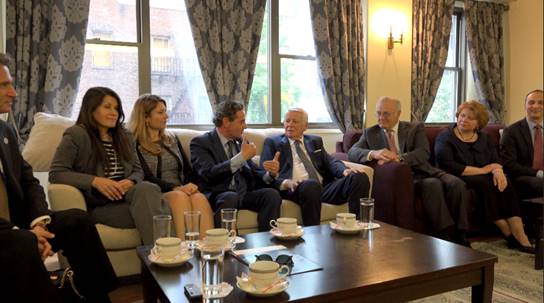 The discussion with the RABC members revolved around the strengthening of the bilateral relations and the current efforts by the Romanian Government to stop the brain drain that continues to plague Romania. Another topic was the new legislation to be introduced soon that will allow for lobbying efforts on behalf Romania, abroad and inside the country. Currently lobbying is considered influence peddling and is severely punishable by law. Lastly, Mr. Melescanu emphasized the need for more US direct investment into the country and asked for the RABC support in that sense, while praising the efforts and the accomplishments of the organization.